Antoine Griezmann was born on March 21, 1991. He is currently 31 years old and plays as a Striker for Atlético de Madrid in Spain. His overall rating in FIFA 23 is 83 with a potential of 83. Griezmann has got a 4-star skillmoves rating. He prefers to shoot with his left foot. His workrates are Medium / Medium. Griezmann's height is 176 cm cm and his weight is estimated at 73 kg kg according to our database. Currently, Antoine Griezmann is playing with numbers 8 and 7. His best stats are: . 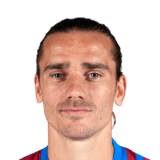 On loan from FC Barcelona