Abdelhamid Soliman Tielemans was born on May 7, 1997. He is currently 24 years old and plays as a Central Midfielder for Leicester City in England. His overall rating in FIFA 22 is 85 with a potential of 88. Tielemans has got a 4-star skillmoves rating. He prefers to shoot with his right foot. His workrates are Medium / Medium. Tielemans's height is 176 cm cm and his weight is estimated at 72 kg kg according to our database. Currently, Abdelhamid Soliman Tielemans is playing with number 8. His best stats are: Short Pass: 89, Long Pass: 88, Vision: 87, Shot Power: 87, Long Shots: 87. 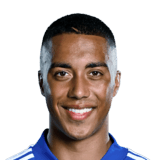