Erick Cabaco was born on April 19, 1995. He is currently 27 years old and plays as a Centre Back for Granada CF in Spain. His overall rating in FIFA 23 is 72 with a potential of 75. Cabaco has got a 2-star skillmoves rating. He prefers to shoot with his right foot. His workrates are Low / High. Cabaco's height is 186 cm cm and his weight is estimated at 75 kg kg according to our database. Currently, Erick Cabaco is playing with number 2. His best stats are: . 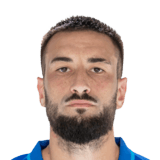 On loan from Getafe CF

Dives Into Tackles (CPU AI Only)